Opening Reception at the Art Council Gallery, Cranbrook, BC
on Friday, February 6, 2015 at 7:00 pm 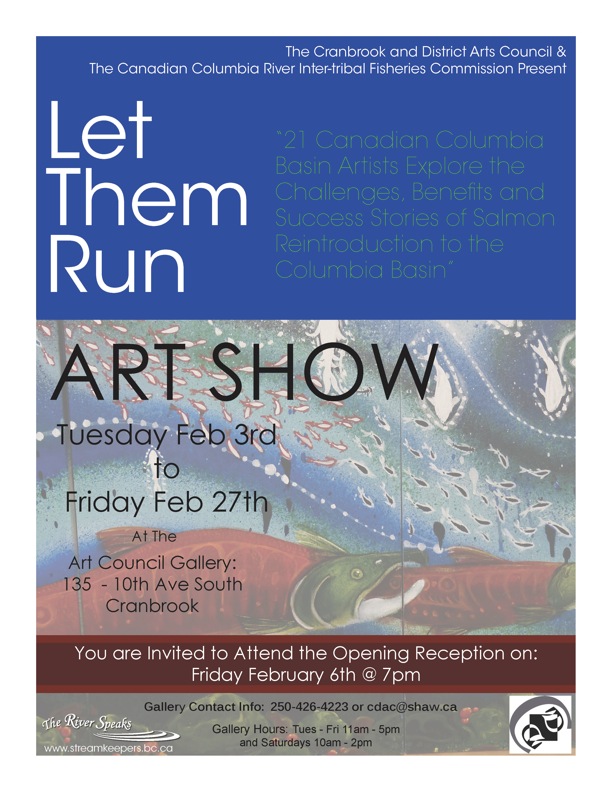 Since the ice age Columbia River Salmon have functioned as the major cultural, spiritual, economic and environmental influence.

Once the largest run of Salmon in the world that migration was abruptly sacrificed in the late 1930s with the construction of the Grand Coulee Dam. The recent PBS documentary American Experience described how building the Grand Coulee resulted in “cultural savagery” with its consequence to US Tribes and Canadian First Nations, and as “environmental butchery” in its destruction of Salmon and to the web of benefits that Salmon gave us.

Completion of the Grand Coulee Dam led to the Columbia River Treaty, which formalized water control from Canada to the USA.

The Treaty review now taking place represents the single most important opportunity to make real environmental change in our lifetime.

When Bill Green, director of the Ktunaxa Nation Council/Canadian Columbia River Inter-Tribal Fisheries Commission asked, “What if we could bring the Salmon back within a century of their loss?” the question prompted consideration.

Was Salmon loss necessary? Was it forever? The Salmo Watershed Streamkeepers Society (SWSS) within its ‘The River Speaks’ awareness campaign reached out to the local Artist community to explore the questions and issues surrounding Salmon Reintroduction.

On May 8th and 9th, 2014, SWSS hosted twenty-one Artists, who came together for the Let Them Run, The Salmon Century experiential learning adventure that focused on Water, the Columbia River Treaty, and the challenges, benefits and successes of Salmon Reintroduction.

Gaining insights, Artists were asked to use their skills to create artwork that defines the meaning, challenges and benefits of Salmon Reintroduction so that they can bring awareness to Basin residents of a loss that can be regained.

This Artist Exhibition staged its first Opening Reception at the Kootenay Gallery in Castlegar, BC on September 26, 2014. During its 6-week exhibit, public interest was spirited, attendance was high, and the exhibition received an overwhelming amount of comment. And now, the Columbia Basin migration has started.

We hope you, the viewer, will gain insights from this Artistic Reimagining exhibition and advocate for Salmon to be reintroduced to the Canadian Columbia River Basin.

Let Them Run, The Salmon Century