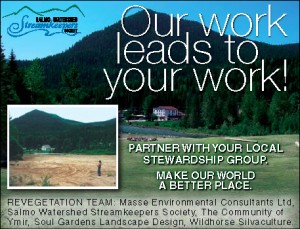 Mining has heavily impacted the Salmo River Watershed.  In fact, there have been more than 600 mines operating sporadically since the mid-1800s, many impacting the river directly with mine tailings and chemical waste products.

In 1999, SWSS took the opportunity to inventory mine tailings and ponds in the Salmo River watershed while conducting Bull Trout telemetry surveys by helicopter. This inventory resulted in the preparation of the Mining Inventory Report in November of 2000, authored by Lisa Heinbuch and edited by Gerry Nellestijn. SWSS identified the Yankee Girl Mine tailings site as a priority concern due to its proximity to the River and to the Village of Ymir.

For the next three years, SWSS conducted tours of the Yankee Girl Mine tailings site with as many individuals, government officials, environmental consultants, mining representative and groups as possible. This was done in the hopes of garnering interest and support to contain and cover the tailings site.

The Ministry of Water, Land and Air Protection (WL&AP) prepared an Environmental Impact Assessment Summary Report on the contaminated status of this site.  This information was presented to the community at a meeting held at the Ymir Community Hall in March of 2003.

With the release of this WL&AP report and in response to the community letter writing campaign that was launched after the community meeting, the Department of Fisheries and Oceans (DFO) contacted the Ministry of Sustainable Resource Management (MSRM) who is the government department responsible for Crown Land. DFO issued an order to restore the site. MSRM prepared a Limited Stage II Preliminary Site Investigation and a Detailed Site Investigation in order to determine how to properly remediate the contaminated site.

In November of 2004, MSRM held a community meeting at the Ymir Community Hall to update the residents on the procedure required to prepare the Detailed Site Investigation. The Ministry of Agriculture and Lands – Contaminated Sites Branch is administering restoration. Options have been developed and the containment of the site against further spring runoff was completed in November of 2005.

Ten years of advocacy by SWSS lead to the remediation of the Yankee Girl Mine tailings site in 2008. The site was then planted with low maintenance native grasses, shrubs, and trees in 2009. This was a momentous occasion for SWSS and the community of Ymir.  The Yankee Girl tailings site had been classified as a heavily contaminated, orphaned waste site, without vegetative growth since abandonment in the 1940s, with negative impacts on the river and community; and now the Yankee Girl land use transformation will provide a healthier environment.

SWSS successfully negotiated for community involvement in the remediation and re-vegetation components as well as the inclusion of local resources and community design concepts throughout the project. The final design includes provisions for a community use green space and bioremediation elements.

As a result of SWSS involvement in the Yankee Girl Mine tailing site, the National Orphaned/Abandoned Mines Initiative (NOAMI) contacted SWSS in 2007.  This National Resources Canada initiative, developed in 1999 and 2000, was the result of stakeholders requesting Mines Ministers in Canada to establish a joint industry-government working group, assisted by other stakeholders, to review the issue of abandoned mines. NOAMI, the resultant multi-stakeholder advisory committee, formed to study various issues and initiatives relating to the development of partnerships in the implementation of remediation programs across Canada.

SWSS Coordinator Gerry Nellestijn gave an insightful presentation at the NOAMI Conference in Vancouver, in November 2008, highlighting the Yankee Girl Restoration Project to a group of 100 people, representing industry, government, first nations, community and other stakeholders.